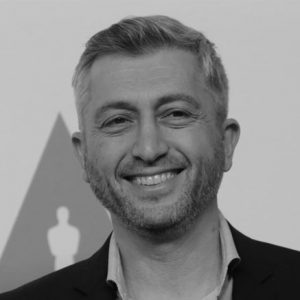 Den Tolmor is an Oscar and Emmy nominated producer and writer, known for Winter on Fire: Ukraine’s Fight for Freedom (2015), Cries from Syria (2017), and Righetto (2020). Tolmor began his career as a producer for a variety television stations, where he worked on numerous successful programs, ranging in scope from political and economic journalism to entertainment and culture.

Tolmor garnered widespread praise for Winter on Fire, a documentary exploring the unrest in Ukraine from the period of 2013 to 2014. Winter on Fire earned Tolmor a nomination for an Academy Award for the Best Documentary Feature, and a Primetime Creative Arts Emmy Award for Exceptional Merit in Documentary Filmmaking. Additionally, Winter on Fire won the People’s Choice Documentary Award at the 2015 Toronto International Film Festival and the Television Academy Honors Award. Tolmor also received the Peter Jennings Award and was an official selection for the Sundance Film Festival for his film, Cries from Syria, a powerful documentary about the Syrian Civil War.

Currently, Tolmor is finishing work on Francesco, a documentary about Pope Francis that tells the story of hope inside the darkness of our times.