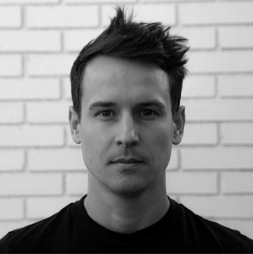 Oleksandr Novichenkov launched his actor’s career in 2005. His first on screen appearances were in music videos of «Tabula Rasa», Valeriy Meladze, Vika Antonova, a duet of Valeriy Meladze and Anastasia Prikhodko. They were created together with a famous Ukrainian director Alan Badoev.

In 2005 starts his producer career as a production assistant in the documentary “Revolution Aurora”, director Oleksandr Anpilogov. With this project started their close cooperation that continues nowadays.

In 2006 Oleksandr was enrolled into Kyiv National I. K. Karpenko-Karyi Theatre, Cinema and Television University; specialty – actor of theater and cinema. Course master – Bogdan Stupka. Hero of Ukraine, People’s Artist of the USSR and Ukraine.

In 2006 he is working on a second documentary “Political corpse” as an assistant of producer.

In 2007 at the invitation of the world-renowned movie director Krzysztof Zanussi Oleksandr went to Poland to perform in a theatrical play “A Midsummer Night’s Dream” by W. Shakespeare.

In 2007-2008, in addition to studying at university he worked on two projects at the same time: as an assistant of producer at documentary “Year. How much is it?”. And as a producer of the television program “MTV made” (UA) – it is interesting that the program launched in several European countries, but only in Ukraine thanks to a highly qualified team of professionals is able to show high ratings and run. Then Novichenkov was invited as a producer to work in “BLUESCREEN production”.

In 2008 Oleksandr Novichenkov undertook an internship in the creative team at the Moscow Art Theater. The play “Seagull” by A. Chekhov was shown in Moscow and Oleksandr starred in it as Treplev.

In 2007-2008, together with Oleksandr Anpilogov, Novichenkov made two seasons of 20 of the automotive program “AutoCity” – television show dedicated to test-drive cars. It also includes a tutorial section on counter-emergency preparation (driving safety)

In 2009, Oleksandr is working on his first colorization film as associate producer of “Only old men are going to battle” and then, in collaboration with “Opera film” and “Formula-colored” restored and colorized such movies as “Officers”, “Podkidysh”, “Volga – Volga”.

The plays “Viy – terrible revenge” based on the plays by N. Gogol with Oleksandr’s performance won the Grand – Prix of The International Theater Festival “Golden Lion”(L’viv).

While studying at the University Oleksandr Novichenkov starred in such television series as “The Ex”, “Return of Mukhtar”; in the movies “Dependence Day”, “Zagrava”, “Who is who to who”, “Brother for brother”, “Crocodile” (France). The movie “Crocodile” participated in the Cannes Film Festival in 2010. Had a lead role as a producer in company “AK-Films”.

Oleksandr conducted an acting master class for the participants of the “Star Factory 2” project.

After graduation, O. Novichenkov was invited to work in Kiev Drama Theater on Podol, where he used to work as an actor before 2012. The artistic director of the theater is Vitaliy Malakhov, a People’s Artist of Ukraine and a winner of Taras Shevchenko National Prize.

In 2011 Oleksandr Novichenkov produced the movie “Diary of my I” and starred in it. The film was selected for the “Short Film Corner” competition at 64 Cannes Film Festival (France).

Oleksandr was an associate producer of the film “Land of Oblivion” with Olga Kurylenko in the lead role. The film took part in more than 50 international festivals.

In cooperation with the US company “Global 3 Pictures” Oleksandr was an associate producer of the colorized version of such films as “Arshin Mal-Alan”, “The Will of Victory”, “Beware of the Car.”

In 2012 Oleksandr Novichenkov as a part of Ukrainian show business stars’ team (Maestro soccer club) participated in the international tournament “Eurofan 2012”. Oleksandr was recognized as the best forward of the tournament. The team ranked second and received the silver medal, the tournament was widely covered by TV channels and media. The team gave concerts all over Ukraine, playing soccer before the performances.

In 2010 Oleksandr and the team won the mini-soccer cup “Dobro” (Kiev) and became the best player of the tournament.

In 2013 – 2014 Oleksandr continued starring in the series “When the dawn comes”, numerous music videos, and advertising and social commercials, including an interactive project aimed at war on drugs “ReDay”, which won the Grand Prix at the Kiev International Advertising Festival. For this part Oleksandr Novichenkov got the Gold Medal “For the best acting / dialogue and monologue.”
This video went viral on YouTube. During the first week it was viewed 1200000 times, more than 200 publications and won multiple awards at many international advertising festivals.

Late 2014 Novichenkov came to Los Angeles to sign the agreement and prepare for the shooting of the film “Tyranny” with the actress Olga Kurylenko. The project is currently under development.

In 2015 Oleksandr Novichenkov takes part in the international festival Burning Man – 2015 (Nevada) as a part of the Ukrainian team, producing an art object “Love”.

2017 hired by G3P as producer and supervisor.

2017 Been under negotiation with 20 Century Fox for colorization movie “Miracle from 24th street” Did test for 15 second. (Project on hold for some reason)

2017 Made the hardest colorization project with Valdis Pelsh colorized documentary chronic World War Two “Arctic Brotherhood” that movie got many awards and festivals.

2017 producing all postproduction of feature movie “Heydr Aliev” budget $15 millions. Finished but not released yet.

2018 Producer of documentary movie “The Journey to the Theatre of Silence” with Andrea Bocelli and David Foster (16 Grammy award) .

“Only Old Men Are Going to the Battle” (colorized version)

“Beware of the Car” (colorized version)