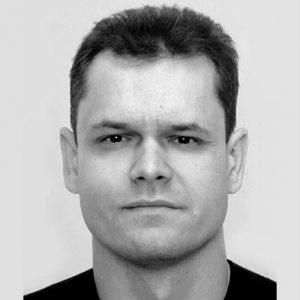 I am Los Angeles based Director | CG Producer. My artistic capabilities and analytical approach found the realization in an advertising sphere and production of CG for future films. Within 18 years I have advanced from an illustrator to the Director/CG Producer/Supervisor. I had begun my career at the end of the 90s as CG artist. I had worked in different studios as a 3D artist, 2D motion designer, editor, shooting board artist, video composer and a VFX supervisor. Strong CG background and creative skills let me work for big names of advertising agencies like BBDO, Visage, Scholz and Friends, Ogilvy, TBWA, Bates, Lowe, HAVAS.

In 2011 I had received “Crystal Microphone” Award as a “Clip Maker of the year”.

Creative Director | Producer | Head of Design Dep. | Director 2013 – 2014 At this period, I was a Creative Director of Novy TV channel. I have led a design department and redesign whole motion design for the tv channel. As well I ha e run the group of 2D print artists and web-designers. At this position, I have shot a lot of tv promo for developed shows and tv-ids. Novy TV Channel

Commercial Director | CG Producer | CG Supervisor 2013 – present In 2013 I have become independent Director and for present moment shooting tv commercials and music videos. Each project consists of preparing production briefs, treatments, schemes and shooting boards. I have shot for such international client as Samsung, Suzuki, Jacobs, Philips and a lot of local brands of banks, mobile operators, alcoholic companies, tv channels. I had shot for Junior Eurovision Contest 2013 and European Olympic Committees in 2014. Independent Commercial Director

Executive Producer | CG Supervisor 2003 – 2004 It was my second time with Newmix Production company, but this time as executive producer inside of BBDO agency. My duties were budgeting, scheduling, management of post and audio studio. Numerous projects for Pedigree, Gillet, Pepsi, Samsung, InBev. Newmix Production

3D Artist | 2D Motion Artist 2000 – 2001 It was my first-time, full day position as CG artist. And it was the in-house company of BBDO advertising agency. As the intern, I have done a lot of thigs: shooting boards, edit, 2D motion design, 3D modeling and rendering. The same year I have become a lead artist of the studio. I have done projects for LG, Samsung, Gillet, Pedigree, Duracell, InBev, Davidoff, Jacobs. Newmix Production

Freelancer 1997 – 2000 My first experience was 3D Studio 4.0 for DOS. I have done a lot of CG generated illustrations for magazines. As well I have done print design for direct clients.

Fin Artist Ever at present moment, I am preparing a lot of sketches, shooting boards and schemes: https://www.sibiryakov.info/fineart