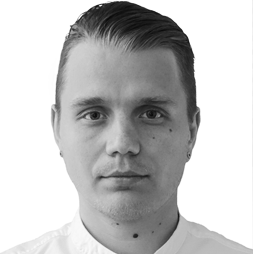 Jensen Noen (born April 20, 1987) is a Los Angeles-based filmmaker, working as a film, commercials and music video director, cinematographer and writer. Originally from Ukraine, Jensen gained notoriety with his early work including the award-winning Oceans Within Us and Blesscode. Since moving to the United States, Jensen has worked with some of the biggest names in entertainment including Khalid, Jay Z, Bryson Tiller, Normani and many others. His latest feature Film, The Perception, has already won awards for Best Feature Film, Best Feature Film Director, Best Thriller and Best Screenplay. Jensen is an honored member of the Ukrainian Film Academy, Union of Filmmakers of Ukraine and the Producers Guild of Ukraine.

Jensen Noen was born in Ukraine and launched his career with MTV where he directed several television shows. Working at MTV gave him the opportunity to expand his work into directing commercials and music videos where he collaborated with top Eastern European artists and labels. In 2009, Jensen directed his first short film, Oceans Within Us, which won two prestigious awards including the Grand Prize for the best short film at the Kyiv International Short Films Festival and Best Short-Length Film of 2011 from the Ukrainian Producer Association and Association of Cinema. His next short film, Blesscode, also won awards for Best Film Script and Best Short Film at industry film festivals. In 2014, Jensen relocated to Los Angeles, California, where he has taken the opportunity to move forward with his career in film, music, and television. He recently completed his first feature film, The Perception, starring the Oscar-nominated Eric Roberts and Nick Bateman. The Perception is expected to debut in 2019.

Jensen has worked with many of music’s top talents in Europe and the United States including Jay Z, Bryson Tiller, Khalid, Normani, Maxwell, Duke Dumont, Asking Alexandria, I See Stars, and many others. He received great industry and commercial praise for his video for top Eastern European pop band Hands Up. As a result of this success, Jensen began to direct videos for RCA, Virgin Records, Roadrunner Records, Atlantic Records, Sumerian Records, and Rise Records. Jensen’s success with music videos also led him into opportunities directing and producing commercials.

Jensen’s career includes numerous short films. Most notably, he directed the award-winning shorts Oceans Within Us and Blesscode in Europe. Once he moved to the United States he continued his film career with Observer, which allowed Jensen to blend his love of film and music video. Jensen’s film Gambit, about a character from the Marvel universe, starring Nick Bateman, received outstanding reviews and viral word of mouth that pushed Jensen and Nick into the industry limelight. The success of Gambit led to their next collaboration, The Perception. The Perception, Jensen’s first feature-length movie, was selected by numerous international film festivals. The European and Asian theatrical release is anticipated in the end of 2018.
The Perception won “Best Feature Film Director” from the ITFF Film & Entertainment Industry, “Best Feature Film Director” and “Best Screenplay” from the South Film and Arts Academy Festival, “Best Trailer” from the Pitch to Screen Film Awards in 2018, Best US made feature film from Prince of Prestige Awards 2018, and Best thriller from Oniros Film Awards 2018.

2016 – First degree diploma, harmonic realization of music and picture in the film Observer and his producer professionalism – The Association of Producers of Ukraine

2013 – Honorary Award for Personal Achievement – Institute of Producing of Ukraine